Inclusivity, Accessibility and Recovery: The UK Tech Ecosystem in 2021 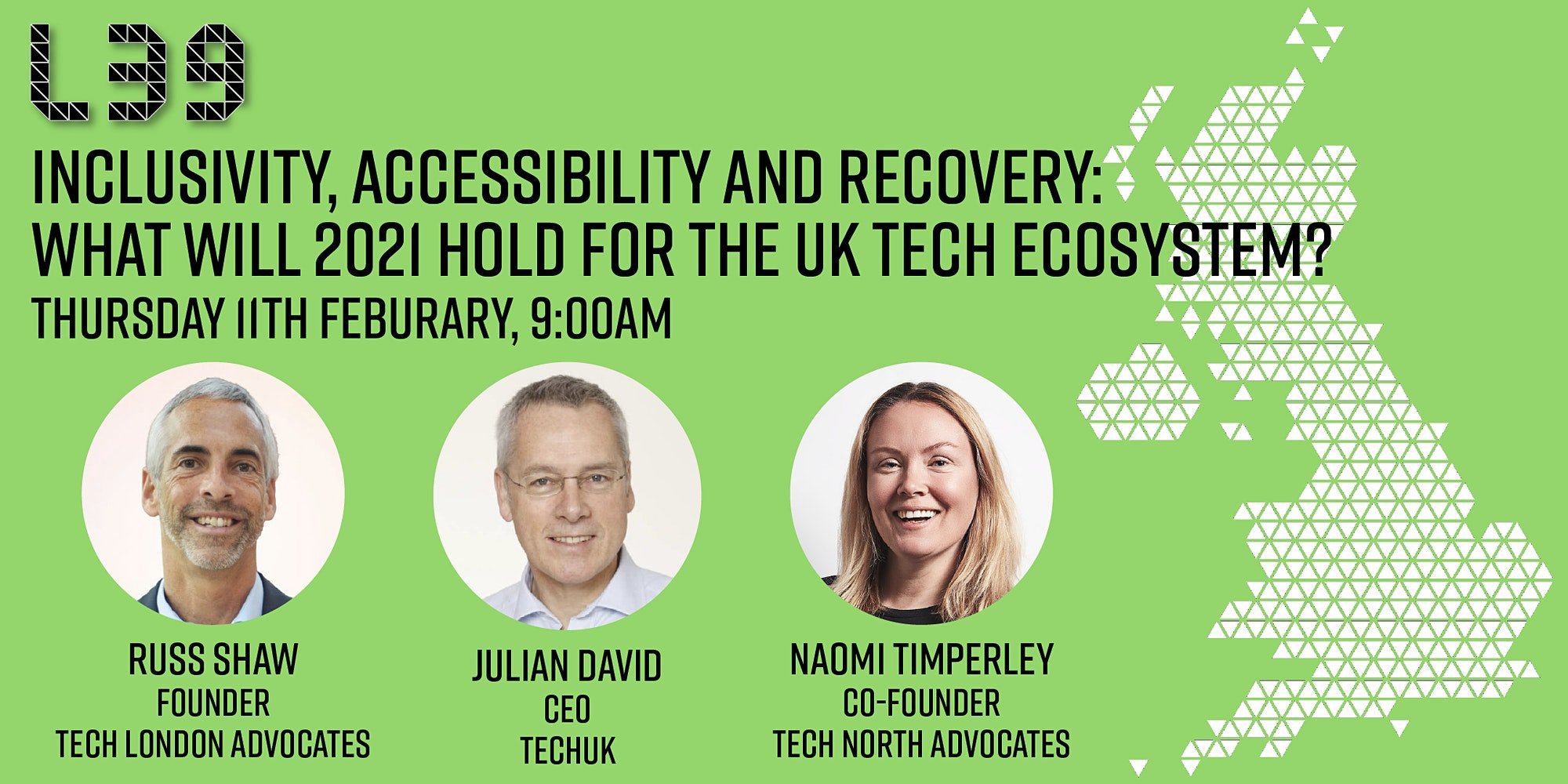 Whilst the tech industry has not been immune to the uncertainty of the last 10 months, it has emerged from the pandemic as one of the most resilient sectors in our economy – in no small part due to the intrinsic forward-looking and problem solving nature of the UK tech ecosystem.

This panel will bring together tech leaders from across the UK to ensure that this winning streak continues and – crucially – how we can ensure that it is felt equally across the country. Discussing key issues of the day such as potential challenges created by Brexit, the persistent digital poverty divide as exasperated by the pandemic, and the untapped potential of emerging tech hubs outside the South-East, this panel will address how we can strengthen the UK ecosystem in an ever evolving global landscape.

The panel session will be moderated by the Head of Level39, Amy French, and conclude with a Q&A where the audience will have the opportunity to pose questions to panellists.

Once you have registered your interest, joining instructions will be shared in advance for attending the virtual event platform.

Russ Shaw is the founder of Tech London Advocates and Global Tech Advocates. He originally founded Tech London Advocates in 2013 to ensure an independent voice of technology sector was heard, but with a focus on the private sector. Since then he has been championing London as a global tech hub and campaigning to address some of the biggest challenges facing tech companies in the UK – diversity, digital skills, immigration, infrastructure and access to funding.

Key achievements for Tech London Advocates (TLA) include successfully campaigning for the introduction of a Chief Digital Officer for London and placing digital jobs on the Shortage Occupation List for the first time.

Russ is a founding partner of London Tech Week, a London Tech Ambassador for the Mayor of London and Advisory Board member for Founders4Schools and the Government’s Digital Skills Partnership. He is a Trustee for Modern Muse Charity, which supports young women and girls who want to study STEM subjects.

He is one of the world’s leading experts on the success of London’s tech ecosystem and has been invited to tech hubs around the world to share his experience. In 2019, he was named to the London Evening Standard’s Progress 1,000, a list of the most influential people in the capital.

In 2016, Russ created Global Tech Advocates, which now licenses the TLA operating model to countries around the world, including Scandinavia, Belfast, the Bay Area, the North of England, Singapore, Shanghai, Spain and Bogotá.

Russ was previously the Chairman of The Marketing Group of Great Britain following senior positions at Skype, Telefónica, O2 and CEO of a later stage startup called Mobileway. In his role as Marketing Director for O2, Russ brokered the relationship with The O2, the most successful indoor venue in the world.

He is an angel and venture investor and has been non-executive director of a number of high growth businesses, including Dialog Semiconductor and Unwire.

Proud to be in the top 50 Computer Weekly Most Influential Women in UK IT 2018, Naomi is an experienced partnerships and engagement consultant with established relationships across the UK.

Naomi has extensive experience working with startups and growth businesses particularly in the tech, digital and creative sectors, and was one of the Maserati 100 in 2015 – a definite list of entrepreneurs who support the entrepreneurs of tomorrow.

She has been a mentor for 8 years and mentored over 250 businesses. As one of 2 iDEA Industry Ambassadors in the world for the Duke of York’s Inspiring Digital Enterprise Award, for her work with Wakelet and iDEA, she is a big champion of Digital Skills for everyone.

Naomi is also an Honorary Industry Fellow at the University of Salford Business School and Chair of the Industry Advisory Board. She sits on GMCA’s Innovation Board, the Board of arts organisation Future Everything and am Chair of investment platform Capital Pilot.

He is a member of the UK Government and Industry Cyber Growth Partnership, the Digital Economy Council and the Department of International Trade’s Strategic Trade Advisory Group. He is also the Vice President for National Trade Associations, on the Executive Board of DIGITALEUROPE, Vice President representing Europe on the board of WITSA the Worldwide IT Association, and a member of the board of the Health innovation Network, the South London Academic Health Science Network.